Following official recognition of IGI as a national organisation in Cameroon, FITCAM is rebranding as IGI Cameroon. FITCAM has been operating in Cameroon since 2007, and has become respected as a leading force for integrity, particularly in the South West Region. Major successful projects have ranged from building anti-corruption capability in universities (e.g. Buea) and SONARA (Cameroonian oil-processing corporation) to exposing corruption in the construction industry. Its standing has been acknowledged over the last few years by the appointment of Stephen Asek to official anti-corruption committees.

FITCAM – Focal Integrity Team Cameroon is IGI’s affiliate, based in Buea. Since its founding in 2007, it has been engaged in a range of anti-corruption activities, such as election monitoring and the internationally-acclaimed University Anti-Corruption Training Project. 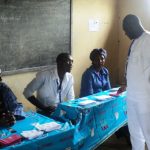 FITCAM helped in the preparations for the recent elections and were accredited observers. Their conclusion was that although the election was demonstrative of the exercise and practice of democracy, there were significant flaws and violations which threw doubt on their credibility and fairness.
Read the report on the Cameroon Election 2013

FITCAM are helping with the monitoring of road and construction contracts under the Government of Cameroon public investment budget. In the Rural Council of Tinto, a number of corrupt practices were uncovered relating to lack of application of the law and procedure in the award of contract. The whistle blowing role of FITCAM could assist the villagers from losing up to 59million francs CFA in the maintenance of earth roads and opening of new tracks.
Read the CNLCC Report TINTO

The successful University Anti-Corruption Training Project piloted in Buea, is now rolling out to universities in Siantou. The vision is to extend this experience across Cameroon, and spearhead anti-corruption initiatives in other central African countries. Further funding is urgently required to enable this very necessary expansion.

Leaders of FITCAM, working with regional authorities and delegations from CONAC (the national anti-corruption commission), recently assisted in the development of wider anti-corruption strategies for the South West Region. The new strategies involve empowering and encouraging local authorities to provide similar types of programme to those led by FITCAM in the universities.

Corruption continues to be menacing around the globe. Democracy, human rights, good governance, sustainable development and the alleviation of povertyhave become interwoven.In improving livelihood and reducing poverty therefore, issues of transparency and good governance must assumed prominence. The political situation in Cameroon has been marked by relative stability over the past decade but in many communities and places, individuals are denied access to their fundamental rights and liberty due to deficiencies in governance, inefficiency in spending and poor service delivery. By diverting scarce resources intended for development, corruption and poor governance has become a major obstacle to poverty reduction and growth.The perverseness and impunity with which corruption is allowed to flourish in the Cameroonian public service, makes a mockery of current institutional changes projected to mount an assault on corruption and poor governance, such as a new anti-corruption commission. Other changes of a broader institutional nature include the introduction of a new criminal procedure code, the establishment of an independent election management body together with the setting up of a special court to try corruption cases.

The central government’s capacity as a facilitator and regulator of social and economic activities to ensure transparent and efficient public finance management, improved business climate and modernization of basic infrastructure necessary for development and improvement of the living environment, lacks visibility and influence in the face of fund misappropriation and corruption by state officials. This weakness in the central government’s capacity to monitor, scrutinize and improve spending and services have fractured formal institutional reforms causing them to encounter significant delays and accomplishment problems, including in implementation, penetration and traction. Corruption jeopardizes the long term initiatives and human development of the poor in the Cameroonian society as it creates effects that are felt more directly by citizens than at the level of local governments. For most people, it is at the local government where they encounter the public sector-from public procurement and housing to business permits and licensing, through to basic services such as education and health.From the point of view of democratic practice, the pervasive nature of corruption in the public service in Cameroon as reflected in its electoral practices and political participation, has had a negative toll on the viability of the nation’s social contract by altering the nature of relationship between government and citizen, a relationship where public officials are not providing what is expected and where citizens no longer trust their authorities. Evidence from the Transparency International’s Global Corruption Barometer 2003 supports this, through its discovery that corruption hits the poor hardest, with direct significant effect on their personal and family life. Improving governance and fighting corruption remain the most critical factors in propelling growth and broad based development in Cameroon to the levels necessary to significantly reduce poverty and strengthen international cooperation.

The Municipal Council’s Business Management and Public Service Fellowships is a powerful tool for...