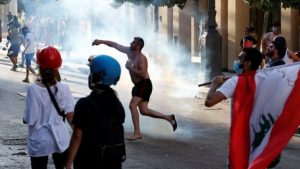 Many Lebanese accuse the political elite of corruption, neglect and mismanagement (BBC / Reuters)

Beirut – a tragedy of bad governance

As we pray for the traumatised people of Beirut, note that Lebanon has an appalling record on corruption: the TI CPI 2019 only awards 28% and ranks it 137th of 198 countries.

The terrible explosion last week seems due to impounded ammonium nitrate, a dual-purpose material (fertiliser and explosive) that is banned in Lebanon. Early reports indicate that many officials knew about the problem, but due to corruption or other bad governance failed to act. Hundreds have now paid for this corruption with their lives, and thousands with their livelihoods.

We are reminded that corruption is not an obscure matter of bureaucracy – it kills!

“A retrospective look at the conflicts dominating the headlines in 2014 presents a grim picture of escalating conflict and human suffering.  Underneath the headlines is a common thread connecting the rise of ISIS, the Ukrainian protesters in the Maidan, and the Nigerian families still desperately seeking someone to #BringBackOurGirls.
That common thread is corruption….”

Rwanda  still   the least corrupt country in the East African Community by far! The...

“Honesty and integrity elevates a nation, but fraud and dishonesty is destructive to any...

Link between corruption and failure to achieve Millennium Development Goals

Research by Transparency International shows a relationship between high levels of corruption and a...

The Municipal Council’s Business Management and Public Service Fellowships is a powerful tool for...